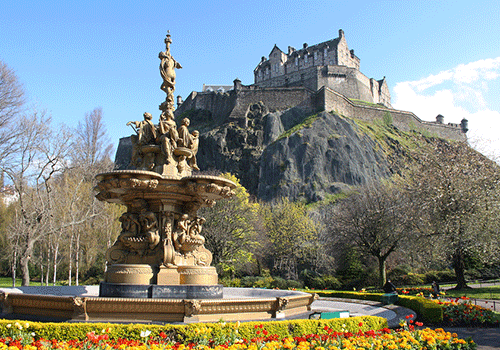 Ten Fun Things to Do in the Scottish Capital

Did you know that Edinburgh is the most popular city to visit in Britain after London? Located in eastern Scotland on the Firth of Forth, it is the Scottish capital, center of finance, education and law in the north, as well as a major tourist draw. It’s not the largest city in Scotland, but there are lots of things to see and do – you could spend weeks here and not do it all! Here are our top ten picks must see and do:

• Walk the Royal Mile (or at least a wee bit of it). Its busy but exciting. Watch for the Museum of Edinburgh where you can experience fascinating tidbits of Edinburgh history – even dress in replicas of historical costume. Best of all – no charge (for that bit of Scots’ frugality in your blood).

• For a trip down memory lane, visit the Museum of Childhood, again it’s free.

• After you have seen Greyfriar’s Bobby’s drinking bowl at the Museum of Edinburgh, you must see the monument to this faithful companion. It is nearby the George IV bridge but your best bet to see scattered monuments and sights is to purchase a bus tour. Then if you wish to return later to explore an interesting spot in depth or pop off and rejoin the tour later, you can. Plus, you get a smattering of historical talks and layout of the city too.

• One can’t miss Edinburgh Castle. It dominates the city’s skyline. See where Queen Mary lowered her baby in a basket, peer over the walls at the pets’ graveyard, experience a lunch of haggis.

• Take a ghost walk as dusk approaches. There’s many to choose from but be sure it includes the subterranean vaults for a really creepy experience.

An alley in old Edinburgh – are you ready for a ghost walk?

• Love gardens? Take your pick. Princes Street Gardens lie in the valley below the castle and the bustling streets for an area of calm within the city. Stroll the paths, admire the statues and plants including a floral clock, or relax on a bench or in an outdoor café. Want your gardens on a smaller scale? Visit Dunbar’s Close Garden off the Royal Mile for a formal garden layout in 17th century style.

• Tour the Royal Yacht Britannia. It involves a side trip to Leith but you will see how the royals cruised. If you are currently cruising (or have cruised before), its fun to compare.

• Like to shop? If you walked part of the Royal Mile, you would have numerous opportunities to shop for crafts, woolens and whiskey. There is the Stockbridge Markets on Sundays, but during the week there are small boutiques, galleries, jewelers and cafes to browse in that area.There are many other outdoor markets as well. For high end and designer goods, it has to be the Multrees Walk.

• Anyone for afternoon tea? The Palace of Holyrood House has afternoon tea served in the mews courtyard. The Queen is in residence at the Palace during Royal Week usually late June/early July. If you are town then when the Palace is obviously closed to the public, an option would be to have a traditional Scottish meal instead with a glass or two of whiskey. You could lunch at the Elephant House where it is rumoured many of the early Harry Potter books were written.

• No matter what time of year you may be visiting, there is sure to be a festival. Perhaps the more well-known ones are the Fringe Festival, and the Royal Edinburgh Military Tattoo. Checking up on what special events are happening in the city long before you are to visit is a wise move, especially for events such as the tattoo which sell out months prior.

Contact your travel professional at Cruise Holidays of Viera either for a cruise which stops at Edinburgh or for a guided land tour of Scotland. If you are the adventurous type, consider a custom vacation and then you can stay as long as you wish in this beautiful city.